I promised the hubster a pie.  I was thinking Key Lime.  The search for the perfect recipe began with a non-dairy substitute for sweetened condensed milk.  I found several ideas for homemade sweetened condensed milk using coconut milk.  Coconut milk is a great substitute in dessert applications, but it does tend to make the final product have a coco-nutty flavor.  That is not the worst outcome, and I think lime and coconut are a good pairing anyway.  I then perused several Key Lime pie recipes and with a little tweak here and there, I think I came up with a pretty good pie, even if it isn't exactly Key Lime.

Bring two 14 oz cans of full fat coconut milk to a boil.  Reduce the heat to a simmer and stir in 1/2 cup of turbinado (raw) sugar.  Simmer for 45 minutes, stirring occasionally, until the liquid is reduced by 1/2.  Set aside and allow to cool.

Place first three ingredients in a food processor and process until the texture of sand.  Slowly drizzle melted butter into processor and pulse until the crumbs begin to come together.  Press into a pie plate, being sure to press evenly across the bottom and up the sides of the pan.  Set aside.

In a mixing bowl mix together the first three ingredients.  With the mixer running add one egg yolk at a time and mix until combined.  Pour into prepared pie crust and bake in a preheated 350 degree oven for 30 minutes or until completely set.  Cool completely on a cooling rack and then chill in the refrigerator for at least two hours before serving. 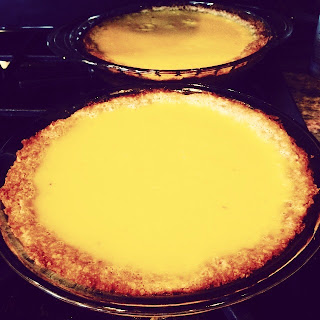