Surviving Mass with an Imp 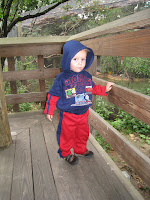 Wingnut is traveling this weekend and with all the rehearsals for the Nutcracker, I had only two options for Mass.  I could have waited until the last Mass of the weekend, the boisterous Life Teen Mass across town, or I could get us all up bright and early for the very peaceful 8 am Mass at our home parish.  I opted for the quiet Mass, but I think folks at that Mass wished I had chosen differently.
Baby Wingnut did not even try to be good.  He did let us know he had no intention of behaving before we even left for church this morning, but I risked it anyway.  We were standing in a corner outside the church before Mass even began.  I knew it was going to be long and painful. Mercifully there isn't any music at this particular Mass, and it never lasts longer than 45 minutes.  I ended up standing in the vestibule of the church where I could see and hear the Mass and Baby Wingnut was muffled to the rest of the parish.
After Mass, Baby Wingnut announced he had been a good boy, to which the rest of us all admonished him and let him know that indeed he had not been good at all.  I took the rest of the children to get donuts and Baby Wingnut tried his best to appear completely disinterested. I really don't think he feels any remorse for disappointing me today.  What an imp he can be.
Email Post
Labels: family parenting spiritual life