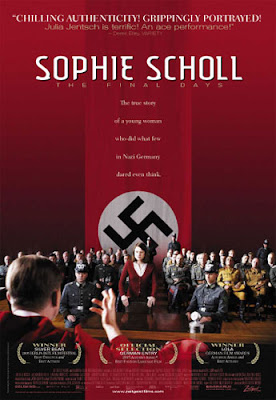 Could there ever be too many movies depicting Nazi Era Germany? I hope not, especially if they are as well done and as inspiring as this film. Sophie Scholl--The Final Days is a German language, foreign film available with English subtitles. The movie is a faithful retelling of the last six days in the life of Germany's most famous anti-Nazi heroine, Sophia Magdalena Scholl, who, along with her brother and five other members of White Rose, was arrested, interrogated, tried, and executed for high treason and troop demoralization by the Nazi regime at the height of World War II, after being caught distributing inflammatory pamphlets denouncing Hitler and the Nazi war machine.
Obviously, this is not light fare, but well worth your time. I spent the film admiring Sophie's courage in adhering to the idea of freedom and peace. I wondered if under the same circumstances I could remain as brave and steadfast. The film makers did not shy away from showing characters of faith, characters unafraid to pray, characters whose faith remained unchanged and undaunted even when faced with execution. I highly recommend this movie to adults and mature adolescents. Other than the dark content and final outcome, the film contains no objectionable material.
Email Post
Labels: reviews

Michelle said…
My BIL says I am David is excelent, too.

I saw another movie on The White Rose back in HS or college (I minored in German). In that movie they showed that she would not donate to things like collecting sweaters for the soldiers on the front, even though her own brother and friends were forced to rotate to the front every so often. She refused to support even those she loved (and who were only serving because they HAD to) because any help for the soldier contributed to the unlawful war and immoral sitution at home. That had to be a difficult decision, but she is spot-on. Even if her beloved brother froze to death, that was better than that he live to fight another day for the forces of evil.
September 8, 2009 at 1:33 PM