He Works in Mysterious Ways 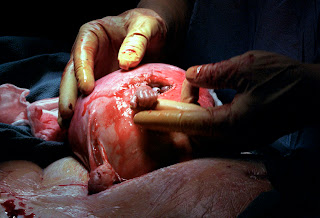 Remember when this photo was first published? It has been ten years, and this photo is still having an impact on the pro-life movement, and has taken on a new relevancy in the face of Obamacare.
Last Friday evening, Karate Kid and I had the privilege of hearing a talk given by the photographer of the picture dubbed by the pro-life movement as "The Hand of Hope." Michael Clancy, while not a professional lecturer, had such a profound, and inspirational message. His story was absolutely riveting.
While I won't be sharing the entire story of the photograph in this post. You can read Mr. Clancy's testimony on his website, here. You can also order free copies of his presentation from Defend Life, here. Just ask for the Defend Life Lecture Series CD for Michael Clancy.
What I did want to share were a few thoughts that came to mind as I listened to Michael's story.
1) Michael Clancy is incredibly humble and possesses a childlike honesty and sincerity when he talks about his life, experiences, and the photograph. He truly believes he was an imperfect instrument of God, a brand new Christian, who would not have described himself as being pro-life before he took the photograph. These qualities give Michael profound credibility.
2) Why would it be important for Michael to be credible? Dr. Joseph Bruner has denied the reality of Michael's photograph from day one. He has denied that Samuel reached out and grasped his finger as shown in the photograph. He claims he posed the photo as a trick on Michael Clancy. He has denied this photo three times. I find that pretty significant.
3) As a result of Dr. Bruner's denial, Michael Clancy's reputation has been ruined and he has been branded a "pro-life, right wing, activist". In the world of journalism, this branding can and has destroyed promising careers. Although, heartbroken over his inability to obtain work as a photo journalist, Michael has dedicated his life to defending this one photo, the Gift God has given to him, and to the world.
4) This photo, the testimony of Samuel and his family, and the testimony of Michael Clancy were instrumental in helping the cause for banning partial birth abortion during Senate hearings on the bill. You can read about their testimony, here. This photo's existence, verifies that infants can and do feel pain prior to reaching the somewhat arbitrarily chosen age of viability. Samuel was 21 weeks in utero. Many states place the gestational age of viability at 23 weeks or more.
5) This photo has relevance in today's ongoing debate over Obamacare. Samuel has two younger brothers. His first brother was born without complication or disability. His second brother was born having a similar spinal lesion to Samuel's which led to Samuel's corrective fetal surgery. The reason his brother did not receive treatment for his spina bifida in utero, is that this particular type of experimental surgery is now controlled by a government research entity (National Institute of Health) and the government denied the request for the surgery when Samuel's parents applied. This part of the story is more complicated than I have stated here. There is a better article about Samuel and his younger brother, here. The point I'm trying to make is that Samuel's surgery was approved and carried out in the private sector. Now that the government has taken control of the study, Samuel's younger brother was ultimately denied the same kind of treatment. You can connect the dots from there.
Those are my thoughts on Michael's lecture. I feel blessed to have been there to hear his story. I know Karate Kid was equally impressed upon and I hope and pray Michael's story stays with her and continues to make an impact upon her throughout her life.
*note* I wrote Michael for permission to use his photograph here. He retains all rights to the photo, which in itself is a miracle. He is more than willing to send copies to anyone who asks and will personally email a digital file to you if you ask. You can find his email address on the site I linked to above. His desire is that we distribute his photo far and wide in Congress and make ourselves clear: WE WILL NOT PAY FOR ABORTIONS! WE WILL VOTE YOU OUT IF YOU VOTE IN FAVOR OF OBAMACARE!
Speaking of which, I received a nice little email from Senator Ben Cardin, reassuring me, through lies and distortions, that the bill on the table will not pay for abortion. I think I'll send him one of Michael's photos!
Email Post
Labels: politics pro-life