What's With the Name 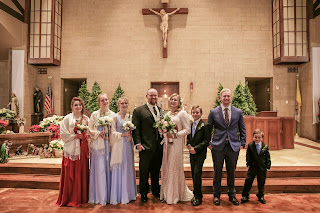 {Our current "half a dozen and more"}

Several months before I began writing this blog, our daughter, Nadja, created several movies with her siblings--mostly spoofs of stories they loved. She'd spend weeks shooting and editing her movies and so they decided they'd create their own little home movie production company. She named it Half a Dozen Productions, paying tribute to the fact there were six children in the family.

I really liked the name and asked if I could steal it. At the time, Ben was 2 years old and we'd had a miscarriage between him and Katerina as well as a loss after him. I was in my early 40s, so I thought naming the blog after our half dozen kids was a safe bet. Cue the laughter. At 42 I became pregnant with Leo.

It took awhile for me to come up with how to handle the blog's name, but in the end, I settled on Half a Dozen and More Productions and as our family grows it really makes more sense.  God willing, we will constantly be adding more between marriages and grandchildren and I love that idea.
Email Post
Labels: family