The Changes a Year Can Bring 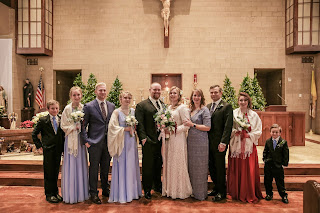 The last year has been busy and full of exciting changes.

Our oldest Nadja was hired full-time as a biologist, became engaged to her best friend in May, and we saw her happily married in our parish in January.  Her husband is loved by us all and he was beyond happy to gain 6 siblings after being an only child his entire life. We are looking forward to seeing what the future holds for them.

John Paul is working successfully and happily as an insurance salesman.  He's so good at it and we are thrilled to see him thriving.

Olivia graduated from paramedic school in April. She bought a car and moved out on her own and is happily working for a local fire department temporarily. The next month or so will bring some very surprising and wonderful changes for her for which I'm not at liberty yet to reveal here.

Angela works part-time as a testing proctor and is in her second year of college studying psychology and criminal justice.  Her goal is to become a forensic psychologist.

Katerina is neck deep in music, between violin lessons, three orchestras, piano and teaching both piano and violin lessons to beginner students.  We are fairly certain she will study music in college when she goes in just another year and a half.

Benedict took the hunter safety course in May and has become the family's most successful hunter, bringing home two deer and a turkey this last season.  He's a 7th grader who is flourishing in school, an avid reader, a wonderful help around the house, and a great big brother to Leo.  He also learned to serve the Latin Mass last year and serves at least once a week in one of two parishes which offer Latin Mass.

Leo recently turned 8 and continues to be the darling tyrant of the family.  He's recently learned to read (he was a bit of a slow starter) and has progressed a ton.  He loves math and science and is constantly asking questions.  In May he will receive his First Holy Communion, opting to have a private Latin Mass that his godparents will be able to attend.

Chris loves his job flying for a private company and has lots of free time to pursue his hobbies--skiing, hunting, learning foreign languages, and watching math videos on Youtube.

Having such grown up and self sufficient children as afforded time for me to pursue some new interests.  As mentioned in previous posts, I'm writing for a group blog at least once a month and compiling a monthly compendium of worthy reads for the same group.  I'm also singing in two Latin Mass Scholas as well as for our parish choir.  I continue to pursue photography, creative cookery, gardening, and raising laying hens.  With two hunters in the family,  I've also learned a lot about processing game.

So many changes and so much growth in just a year.  I'm looking forward to seeing what comes next.
Email Post