Our Personal Connection to Theodore McCarrick 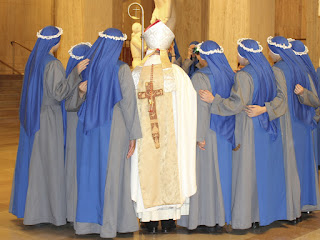 He has been formally laicized. Thanks be to God. What an agonizing several months it has been between the announcement of credible allegations against Theodore McCarrick and his defrocking. It is right and just that this has finally occurred and it brings a long sigh of relief to our family.

McCarrick was our Archbishop when we lived in the D.C. area.  We were never fans.  He was known to be heterodox.  He was too media savvy and too smarmy.  He was not a shepherd in any sense of the word. Did we think he was a homosexual pedophile predator? Not in the least.  It really came as a complete shock to us but when the news first broke in June of 2018 we didn't find it all that difficult to believe.

Not only was he our Archbishop, he was the patron to the order we had such a close personal connection with.  He appeared and was accorded a place of honor at all of their Masses of ordination and profession of vows.  We know this order. We love this order. This order is faithful, vibrant, and orthodox.  It was everything he was not. We couldn't really understand his patronage then and we definitely can't understand their acceptance of his patronage with all the new information of his evil life.  He was even given space on their seminary grounds and had seminarians as assistants. It makes my stomach churn.  To date the order has said nothing to clarify whether they knew of his predation.  Their silence has been rather deafening and disheartening.  I feel truly sorry for the damage his association as done to the order and I continue to pray for them: that they might recover from the harm done and that they continue to grow and inspire vocations.

I've been praying for McCarrick as well.  I pray he will truly repent and convert.  I pray for the good of his own soul as well as for the healing of the souls, vocations, and faith of those he wreaked devastation upon by his despicable sinful acts.  May he have perfect contrition and be forgiven; for God is merciful, but He is also just.
Email Post
Labels: current events scandal