Isn't it a shame so many of the bishops in the United States have moved the observance of the Solemnity of the Ascension to Sunday?  We are truly blessed to belong to a parish in which our priest is willing to do a calendar work around by celebrating Ascension on the liturgically proper day by saying Mass in the Extraordinary Form.

Chris and I tried to recall when the change was implemented on the car ride home from Mass this morning.  I recalled attending Mass on Ascension Thursday, at least for a few years.  He thought it was never a Holy Day of Obligation.  I looked it up and found the change had been made in 1999.  It is true, he may not recalling going to Mass on actual Ascension Thursday, but he did grow up in Spokane, a notoriously bad diocese at that time.

We lose so much when we move things around liturgically.  This change really makes no sense to me at all.  Let's pray for a return to the traditional practice of celebrating the Ascension as it is meant to be celebrated, 40 days after Easter exactly.

In honor of today, I decided I'd make a special dessert.  I came across this recipe for a rhubarb pudding cake a few days ago and as our rhubarb is ready to harvest, I thought today would be a good day to try it out.  It smelled delicious as it came out of the oven.  I thought I should take a little taste out of the corner to make sure it was good.  As I did, I remembered my grandmother used to do the same thing.  Almost every dessert she made for one of our visits to her home had a little corner missing.  She always told us it was a little gnome who'd taken his share.  That memory really brought her close to me today.  It's been 1 1/2 years and I still miss her. It's funny how such little things can make one feel so nostalgic. 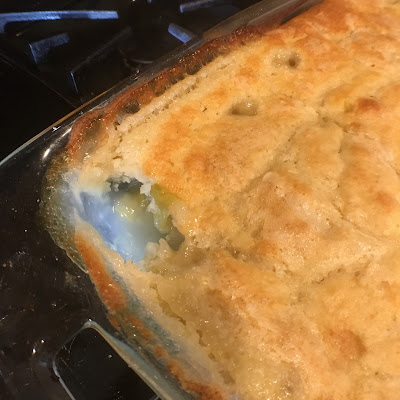