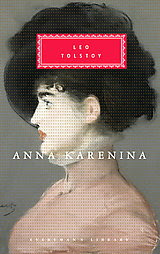 I've always shied away from this novel. I am just not a fan of adultery story lines. I've seen several different versions of Anna Karenina on video, but the story was always romanticized. I just can't sympathize with adulterers and I cannot see how such stories are romantic. Still, I'd heard this book was wonderful, and Leo Tolstoy is often lauded as the world's greatest novelist. Being a fan of classic literature, I finally decided I'd try and read it. I was not disappointed. Unlike movies based on this work, Anna Karenina and Count Vronsky's love affair is far from romantic. It is tragic. Even before Anna's despair drives her to suicide, their relationship is tragic. Their selfishness does irreparable harm to Anna's son, her husband, Vronsky's career, Anna's reputation, and to their own child.
The title of Tolstoy's novel may be Anna Karenina, but her story comprises less than half of the pages. The main character of this novel, and a much more sympathetic one, in my opinion, is Constantin Levin. The exploration of his character, activities, ideals, and struggles was much more interesting and complex than the love affair between Anna and Vronsky. Levin's is a deep mind who tends to over think most every aspect of his life, from when, whom, and how to marry, to his relationships with his family; from how to run his estate to how he should relate to his workers; from an inward struggle to understand faith to his thoughts on the political landscape of Russia. At times I found his inner turmoil intriguing, at others I found it to be a bit much, tending toward self absorption.
Having finally read this novel, I've come to understand it not as a tragic love story, but a story exploring the deeper theme on the purpose and significance of life. Most of the main characters explore this theme at some level or another, but Anna and Levin go to passionate extremes to find meaning. Both even despair when that import appears to be stripped from them. In the end, Anna, because she found her life's merit to be false, commits suicide, whereas Levin is able to pass through despair to find the true meaning and purpose to his life.
So, Anna Karenina fans, did I get it right? Is this what you took away from your reading of the book? I'm off to dive into War and Peace.
If you haven't yet read Anna Karenina I highly suggest finding the Everyman's Library edition translated by Louise and Aylmer Maude. I've read they were close personal friends of Leo Tolstoy and their translation is the very closest to the original Russian. I also found the character guide at the front of the book to be extremely helpful. Due to mature thematic elements I would recommend this book for older high schoolers and adults only.
Email Post
Labels: reviews

Sarah - Kala said…
Spot on, darling. I need to re-read it. Of course, at present I am reading The Mystical City of God. After that, I will begin reading the Lauvansdatter books you suggested (books arrive my door on Friday, so it will be most difficult to not tear into them straight away by putting aside Mystical . . . I must finish Mystical first). Anyway, I also began War and Peace when we moved here, but put it aside . . . silly! it was getting "good", too. Now I'll have to reread the first hundred plus pages! Ach.

Anyway, any good book worth it's salt will be more than the title suggests and make the reader reflect upon the BIG picture of life. The meaning of life, life's tragic moments etc. One of the reasons I so like the classics is that so many of them touch on Christianity or strong Faith or weakened Faith that becomes stronger . . .

Michelle said…
I started listening to this book on my iPod last summer when I was able to get on the treadmill for long stretches. I only got about 20% of the way through and LOVED it. I checked the book out of the library, but never had a chance to even crack it open. (sigh)

Maurisa said…
Oops! Sorry, Michelle! Who doesn't know she kills herself??? I should have posted a spoiler alert. I don't think it will ruin your reading the book.
January 14, 2010 at 7:20 AM