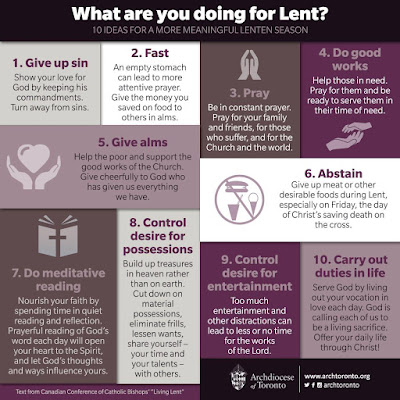 I saw this graphic on Facebook and loved it.  It really makes Lenten sacrifices more meaningful.

One thing we've adopted the last couple years is to engage in meditative or spiritual reading for 30 minutes everyday.  I've found age appropriate materials for each of the children, even for Leo.  While the rest of the family is reading, I read to Leo and then I squeeze in my half hour wherever I'm able later in the day.  Last year, we all realized how much we all benefited from this focused time of reading, meditation, and prayer. 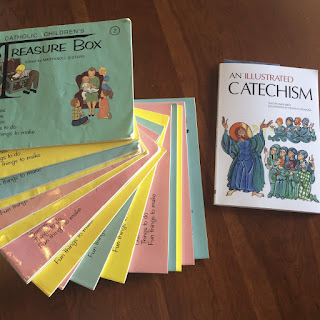 These are the books I'm reading to Leo.  We read from the Catechism for the first 10 minutes and then we read an entire Treasure Box book.  We read the Treasure books last year, and he really loved it.  He even remembered we had done so when I brought them to my bedroom on Ash Wednesday. 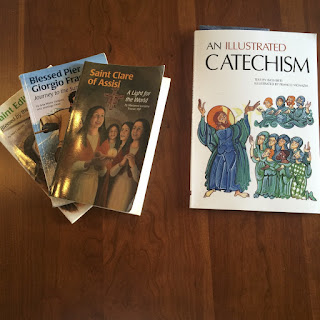 Ben is joining us for the Catechism book.  The illustrations are fantastic and we are able to really focus on some of the tenets of the faith, one on one.  He's also reading chapter books about various saints, I only have a few of the titles pictured here. 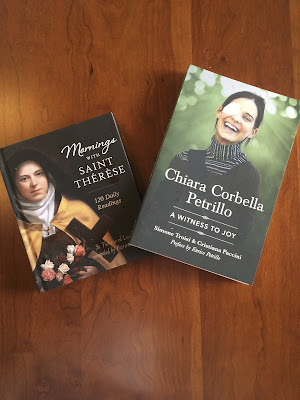 I purchased these books for Katerina, but so far she's been reading the Book of Esther from the bible. She will be confirmed this coming June and she chose Queen Esther as her confirmation saint. 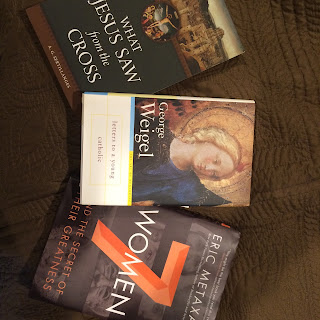 These are Angela's selections.  I read 7 Women just a few weeks ago and loved it.  I've assigned Letters to a Young Catholic to some of my other children over the years and the final title was a suggestion from a good friend.  I may read that one, myself, once Angela is finished with it. 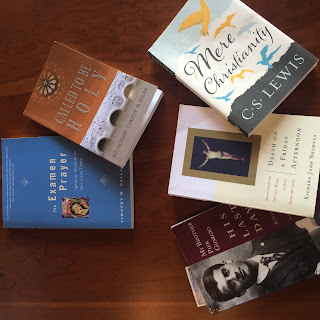 These are some of the books I have for myself.  I'd already began Called to be Holy and My Brother Pier Giorgio before Lent.  I read Father Neuhaus' Catholic Matters last Lent and Chris suggested Death on a Friday Afternoon for this year.  Mere Christianity is a title I've always wanted to read and after reading The Screwtape Letters this summer, I decided I definitely needed to tackle Mere Christianity.  The Examen Prayer is one I've read in the past, but have drifted from the practice of a daily examen, which is something I hope to remedy this 40 days.

These are our lofty goals.  With God's Grace, we hope to draw closer to him each day.