I'm not usually a big fan of the slow cooker, but when I come across a good slow cooker recipe and can adapt it so it actually turns out something pretty scrumptious, that is a happy day.  One of the huge draw backs of slow cooking meats is you lose any wonderful, crispy caramelization and that will remain true for slow cooker carnitas, unless you are willing to make that one-extra-little-step and sauté the shredded meat in a little olive oil until it is just starting to get some lovely crispy bits and pieces.  Trust me.  It is worth it!


Salt and pepper pork chunks liberally.  Heat oil in a skillet until a bit of water sizzles when splashed upon the oil.  Add the pork in batches, being careful not to crowd the pan, and brown the pork on all sides, but do not cook all the way through.  Remove and set aside while browning the remaining meat. 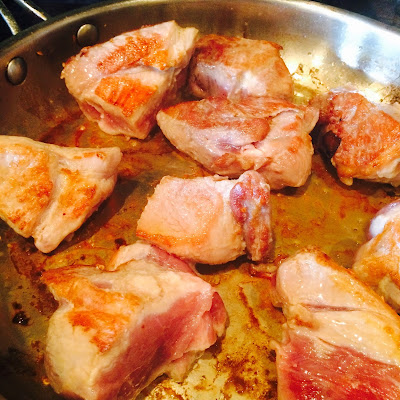 Notice how the pan is not overcrowded and the pork is just taking on some nice caramelized brown color.

Place the browned pork in your slow cooker.  Add the orange zest, juice, and spent halves, as well as the rest of the spices and onion.  Stir to coat the meat in the spices and pour in the broth.  Cook on low for 6-8 hours, until the meat is tender and easily shreds.  Remove meat from the cooker and reserve 1 cup of strained liquid from the slow cooker and set aside.  Using a fork, shredded the meat into bite sized pieces. 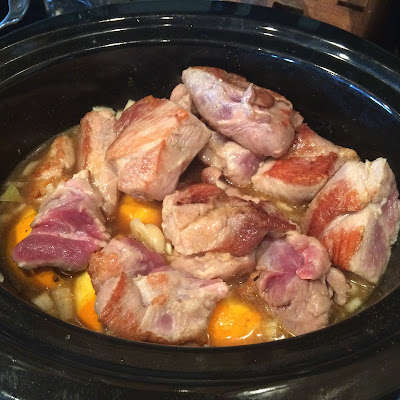 You may need to use more or less broth, depending on the size of your crockpot.  You want the liquid to cover about 2/3 to 3/4 of the meat.  As the meat gives off its juices the liquid will end up covering everything.

In a large skillet, heat 1-2 TBPS oil.  Adding the shredded meat in batches sauté until you begin to get some nice brown caramelized bits.  Remove from the pan to a serving dish and pour some of the reserved broth over the meat.  Serve immediately as tacos or over a salad or rice, garnished with avocado, salsa, jalapeños, etc. 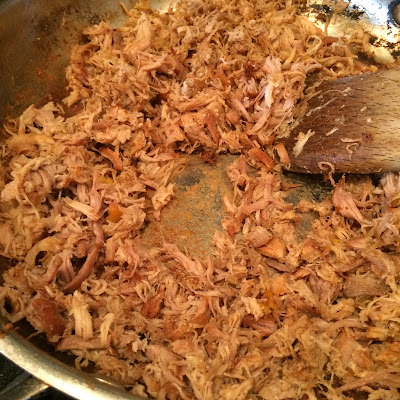 This last little browning step is soooooooo worth it!
Email Post
Labels: recipes

Kimberly Paradiso said…
This is a favorite of ours especially in the summertime. I usually make a day ahead and then we take the meat and other fixins for lettuce tacos to have at the beach. I've never used oranges though, sounds very good and I'll have to give it a try next time!
June 18, 2015 at 10:13 AM