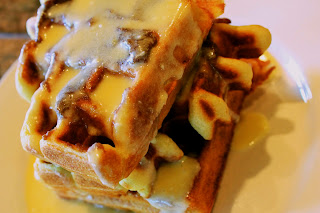 I haven't posted a recipe lately, but recently I saw a recipe for Cinnamon Roll Waffles on Pinterest that peaked my interest.  Of course I had to revamp the recipe, actually write my own, as the original recipe had lots of milk and a cream cheese frosting.  The only aspect of the original I kept was recipe for the cinnamon butter sauce. Although it didn't call for it, the next time I make these I will melt the cinnamon butter sauce in a small sauce pan.  The texture was a bit too gritty from the brown sugar.

In a large bowl stir together dry ingredients including orange zest.   In a medium size bowl mix together wet ingredients, beating eggs well.  Add the wet ingredients to the dry and fold together gently until homogenous.  Bake in waffle maker according to manufacturer's instructions

In a small sauce pan melt butter, add sugar and cinnamon and stir until sugar is dissolved.  Set aside.

Whip butter, slowly add orange juice a tablespoon at a time, mixing  as you add.  Slowly add powdered sugar and beat until smooth and the consistency you would like.  Mine was pouring consistency, but you could make it thicker or thinner if you'd like.

Dawn said…
These were yummy. I had to guess at the baking powder and baking soda..I hope you meant 1 1/2 tsp baking soda and 3 tsp baking powder. That's what I did and they came out okay. I think next time I'll use buttermilk and go with a cream cheese frosting. The powdered sugar was a little grainy. 5 out of 7 liked it. So it won't be a staple, but I like the waffle recipe and will use it sans the orange zest for regular waffles. Thanks for sharing!
April 25, 2012 at 8:00 AM

alfred said…
You can also spread it with a knife onto pancakes, waffles, crepes, turnovers, croissants and muffins. Another possibility is to whip it into fresh whipped cream for a delicious spread to fill layer cakes.