Several months ago, Chris mentioned we should drive a few hours north to witness the 2017 eclipse in totality.  We were going to experience 99.1% here in our own yard, so I honestly didn't think we needed to travel to see more of an eclipse.  Fortunately, Chris continued to talk up the eclipse and threw in the idea of spending a couple days in Sun Valley before August 21st.  I finally agreed to the idea and he began planning the trip which included two nights of pampering in Sun Valley consisting of great food and fun for everyone and then one night roughing it at a campsite.

Chris found a property in Rigby, Idaho via AirBNB which was renting out camping spots especially for the eclipse.  The price wasn't too bad and the property included portable out houses.  The boys were excited about the prospect of camping, something we've never done with the kids before.  After our luxurious getaway in Sun Valley, we drove about 3 hours to the campsite.  The property owners were wonderfully organized.  They'd sold 53 sites and had them all marked out, numbered, and with our names posted.  The boys quickly made friends with other camping families and spent the evening collecting bugs and exploring the property.  We roasted marshmallows around a campfire and met some really wonderful and smart folks who were lovers of astronomy, much like our own family.  When quiet hours hit at 10:30 that night the camp was dead silent and we got as much rest as was possible sleeping crammed in a tent on air mattresses in fairly cold temps.

In the morning we had breakfast and began setting up my camera on a tripod and using the solar filter for our telescope I took a couple preliminary images of the sun before first contact.  We geared up with our special solar eclipse glasses and sternly warned the boys to only look at the eclipse while wearing their glasses.  The campsite was electrified with excitement as families set up their telescopes, solar scopes, etc. around us.  After first contact I took one photo and then decided my equipment wasn't quite specialized enough to capture great photos and really I just wanted to sit back and enjoy the event.  It was so much fun.  As second contact approached the excitement grew.  There was cheering as folks around us counted down to totality.  To see the eclipse in totality was something I will never forget.  It was awe inspiring and I got choked up just considering the greatness of God's creation.  To have created the sun and moon in such a way that their relative diameters and distances between the earth and themselves is so amazing.  The geometry for a total eclipse is so precise one cannot just believe it's just chance. Ben was particularly impressed expressing his awe and wonder, "4 days for 2 minutes was totally worth it."

At the end a three hour drive home took more than eight painful hours but I will be forever grateful for a husband who appreciates the wonders of the universe and encouraged us all to partake in such a unique event.  It was an experience we were able to share with our three youngest children and I hope a cherished memory for them, as it is now for me. 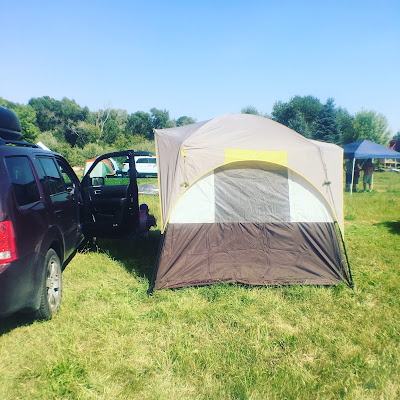 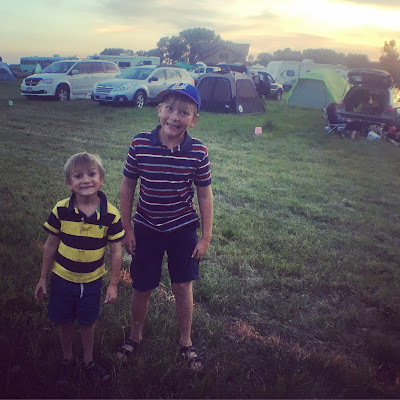 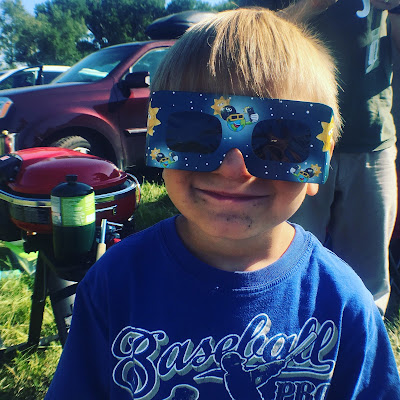 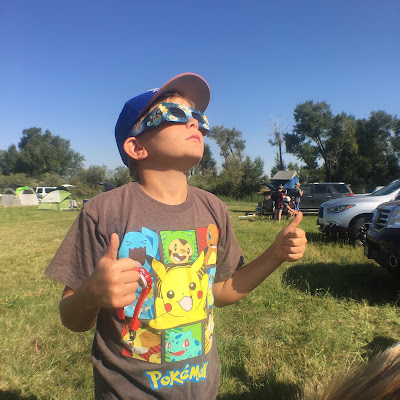 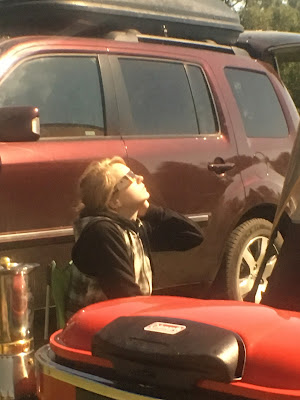 Even the teenager thought it was pretty awesome 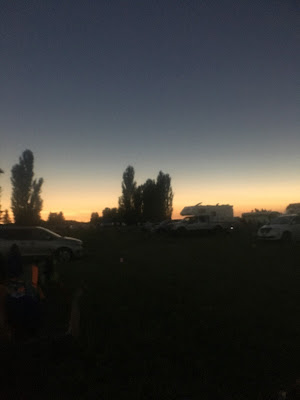 At totality we experienced a 360 degree sunset 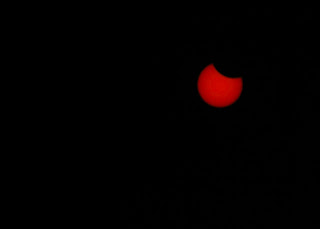 My sole eclipse photo which ended up not being too shabby.  I'm still glad I resisted the urge to photograph the entire event and just enjoyed it live.
Email Post
Labels: astronomers vacation wonder at God's creation

Chere Mama said…
Love "Eclipse thumbs up". All your pictures are great! Wasn't that an amazing experience!!
September 3, 2017 at 1:57 PM