The Value in Falling Short

Benedict has played Minor Little League Baseball for the last three years.  He loves it and has improved in both hitting and fielding each year, but this year his improvement was phenomenal.  He's always been a good little contact hitter, rarely striking out at bat.  Three games into this last season he told me he'd set a goal for himself.  He wasn't going to strike out a single time the entire season.  Game after game he managed to make contact with the ball or would carefully watch imperfect pitches go by and make it on to base on balls.  It got to the point I started to worry with each at bat, "What if he strikes out?"

Ben made it through the entire regular season without striking out a single time.  He was thrilled.  His team mates were impressed, even if they did bet on him eventually being struck out.  His team earned the second seed in the local playoffs.  His streak continued through game 1.  Amazing!  His first at bat in the quarter finals he watched a pitch go by confident it was a ball.  It was not.  He swung at the next two pitch making contact only for the balls to fly foul.  With a full count looming over him and the opposing team's pitcher, Ben watched one more low pitch go by and it was called a strike.  The poor kid went down looking. His coach and teammates patted him on the back as he slumped back to the dugout and consoled him with,  "It's alright, Ben. Everyone strikes out."

On the way home from the game I took the opportunity to let Ben know how proud I was of him.  He set a real goal for himself and he came so very close to achieving it. I told him to look at how much his skills had soared this year.  Not only did he improve his contact hitting, but he also started following through once his bat hit the ball and several times his hits made it out of the infield and had to be chased down by outfielders.  His fielding skills had developed enough for him to be trusted with third base duties on several occasions, even during the playoffs. I encouraged him by saying he had so much to be proud of, but also has more skill to continue developing.  We talked about the value of setting goals, even when we don't quite meet our ambitions we almost always succeed in doing better.

Ben learned a valuable lesson in baseball this season and it is one that can carry over into so many other aspects of his life.  It is exceedingly good to aspire toward improvement in all areas of our lives.  Achieving our aims is satisfying for certain, but I think there is more value in falling just a little short.  Missing the mark gives us something more to work toward in future, keeps us striving for eventual success, and helps us grow in humility. 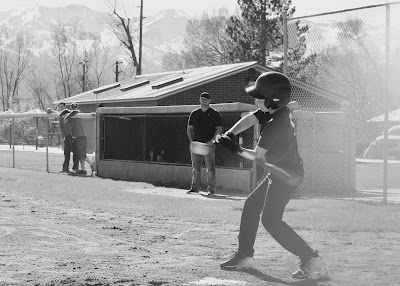