The following is the working draft from my brother, Walter's, eulogy for our grandmother.  The actual spoken version was so much more than is written here, but how do you condense and put into words 105 years of an extraordinary life? We all felt he did a marvelous job. 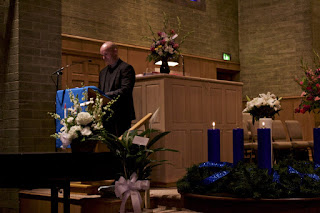 The greatest truth about my Grandma is that she chose to focus her life around the cares and needs of others instead of being absorbed with herself.  Her final wishes reveal how she wished to deflect attention from herself.  “Don’t print my age or my picture in the paper.”  She was 105 and a beautiful woman so why wouldn’t we expose the rest of the world to who she was?  Simply put she was more interested in inviting others into her heart and home than being the center of attention.  Grandma didn’t even like having her picture taken.  Whoever was behind the camera would tell her to smile and she would not say a word but instead gave a look of “Just take the picture dear”.   If you tried to get her thoughts on how you could help her or gift ideas for her she would simply reply…”Don’t make a fuss”.

Even though she was uncomfortable with the camera or parties given in her honor she was more than comfortable with sharing her time and care with others.  All you had to do was visit her house to see how gracious of woman she was.  In the middle of her living room there was a card table that felt like was the center of the universe.  At that table many games of cribbage, pinochle and Yahtzee were played and even more meals were shared.  I had my first taste of whiskey provided by my Uncle Otto at that table.  No matter who you were…if you made it through the front door you were welcome at her table.  If there was a larger occasion with more people she had a table that extended with extra leaves while every piece of furniture that remotely resembled a chair was employed to seat her guests.  There was always room for one more even if it meant she gave up her seat.  If you sat next to Grandma during a meal you were either the most lucky or unlucky person in that room, depending on your perspective.  If there was an empty spot on your plate she made sure there was food to replace it.  It felt as if it was more important to her that you were stuffed than for her to have more than a couple of bites of food.

Grandma loved family.  My earliest memories were going over to her house every Sunday where we would feast on waffles, bacon, and potato salad.  It was not uncommon for a group of adults to be gathered around her table playing cards.  We would also tag along with her to visit Aunt Lil at “the farm” in Post Falls.  On one of our trips my cousins, Mark and Chris, and I decided we were bored with picking cherries and climbed over the rock wall to get up close to Aunt Lil’s bull and play matador.   It was one of the few times we saw her upset with us and we faced the severe punishment of having our ears pinched.   What made the family excursions so memorable was the feeling that she always wanted you to be there with her…even if you were misbehaving.  Over time grandchildren began to provide her with great grandchildren and there was no doubt she loved her role as GG.  Any picture of her with a smile on her face she is holding a child on her lap or in her arms.  A term she coined “the rodeo” was when all the great grandkids came over to her house to enjoy a time of sitting on her lap and eating food at her table.  No matter how loud things got with the addition of kids Grandma was in her element.

Being Norwegian was a big part of the family experience with her.  We had a yearly tradition of making Lefse at her house during the holidays.  When we arrived everything was ready to go.  Tons of dough was rolled, a spadoo was the central utensil used and plenty of egg nog and hushka was consumed.  All the while the phrase, "Uff da!" was proclaimed regularly.  The more eggnog consumed the more often, "Uff da!" was shouted.  The only tradition that was more special to my Grandma was having everyone over on Christmas Eve.  We would share a traditional Norwegian Christmas Eve dinner of ham and dumplings, her sweet pickles with green dye along with chocolate cream and cream cheese pies.   There was a Christmas tree always in the same spot (without blinking lights on it) with presents for everyone underneath.  In the corner was a table full of lit candles…except for that one Christmas candle that was too pretty to be used and there was the distinctive smell that we will forever associate love, family, and Grandma with.   The one moment each year that revealed her heart the most was the prayer right before we ate the meal.  It was the only time you saw Grandma emotional.  The prayer was always quick but when she prayed you could hear the deep level of thankfulness she had for what she had and more important who she had in her life.

Being outdoors was another important part of her life.  When the weather was nice she was always out tending to her beautiful flowers or abundance of vegetables in her garden.  She daily went for walks in her neighborhood and even mowed her own lawn when she was in her 90s…ignoring my dad’s scolding every now and then.  She loved to take us grandkids to Duncan Gardens, the Rose and Lilac Gardens and once had to fish me out of the wishing pond at the Japanese Gardens…yes another ear pinching.  What made Grandma so much fun was she had a sense of adventure and loved to bring anyone along who wanted to join her.

A few years back on Facebook there was a post my sisters and I were commenting on in regards to the best thing in life.  Lisa Maxwell had the best response when she said the best thing in life was “being a Maxwell”.   The one thing I believe that made Grandma the most special was that she made everyone feel as if they were part of the family…everyone was a Maxwell to her.  My dad told me a story of when he and Wayne were young and they asked Grandma if they could build an ice rink in the back yard.  She said no.  What she didn’t know was they had already built the rink and a few of their friends were outside skating on it when the question was asked.  Instead of shooing the neighbor kids away she made them all food and invited them in.  That is what being a Maxwell was all about to her.  When I went to see her for the final time at the Regency Center with my Dad and Angela, a worker who was getting off her shift stopped by and with tears in her eyes she told us that losing Grandma was going to be one of the most difficult losses for their staff.   This was because Grandma went out of her way to care for whoever was around her.  Even this church experienced her generosity for over 70 years, whether if it was volunteering to bake cookies or give of her time in other ways.

When Pastor Dave asked me to share a scripture that was a reflection of Grandma it took me some time but I finally came to Galatians chapter 5.  The author writes about how God is constantly working in us to remove the selfish things in our lives that can be destructive and through His Holy Spirit replace it with something better.  As I read this passage I would like to ask everyone here to close your eyes and think about how Grandma set an example for each one of us to follow in regards to each element that makes up the fruit of the spirit.

“But the Holy Spirit produces this kind of fruit in our lives: love, joy, peace, patience, kindness, goodness faithfulness, gentleness and self-control.  There is no law against these things.  Those who belong to Christ Jesus have nailed the passions and desires of their sinful nature to his cross and crucified them there.  Since we are living by the Spirit, let us follow the Spirit’s leading in every part of our lives.  Let us not become conceited, or provoke one another, or be jealous of one another.”
Thank you Grandma for being a living example of the Apostle Paul’s words!

Grace and Peace be with you all!