Lil' Lamb turned 15 months last Friday, so I'm a tad late posting this.  That's the story of my life these days.

He has really changed a ton this month. His personality is really emerging and it is pretty hilarious.  He's become very vocal and social.  He loves to yell, "Hi!" to anyone who will listen.

He has also learned that antagonizing siblings is hysterical.  He laughs with glee at the sound of hard objects hitting his siblings in the head.  He loves for them to fake cry, or really cry.  It doesn't matter to him.  He'll then run to me and lay his head in my lap like he's the one that needs sympathy. It's a great game.

Another favorite is hide and seek.  He'll run throughout the house seeking his playmate and then squeal in abject terror when they jump out at him.  He'll then run away giggling.

Lil' Lamb loves, loves, loves being outside.  In fact, we can't even say the word "outside" anymore, we have to spell it.  I'm sure by next month, he'll know how to spell it, too. 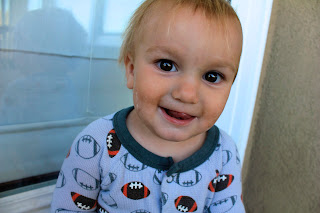 The little man of the perpetually dirty face. 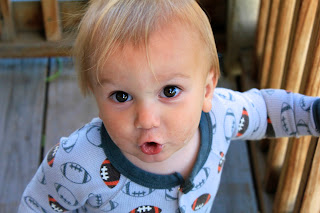 He still makes the funniest faces. 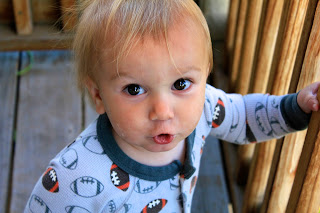 Especially when he's babbling at me.

Anonymous said…
Oh My gosh! Lil' Lamb looks like Lil' Wingnut in those last too pictures!!! :)