Pumpkin Artistry, Or Lack There Of

Pumpkin carving is a tradition for my kiddos. We've been doing it since Karate Kid was a tyke. It began with the children choosing their own pumpkins each year, and then making a huge scene over having to clean out the goo. So I'd clean out the goo. They'd then choose a pattern for their pumpkin, usually from a Pumpkin Master's kit. I'd hope against hope that they'd choose one of the simpler patterns. Of course they'd choose the most difficult pattern. They'd make a big show out of trying to carve their pumpkins and then I'd end up doing it for them. Several years ago I ended up carving 5 pumpkins. It took hours. I was a glutton for punishment!
This year, they were able to do the work almost completely on their own. I didn't carve a single pumpkin and only had to lend a hand to helping the two youngest with their cleaning and carving. They turned out some real wonderful works of art. 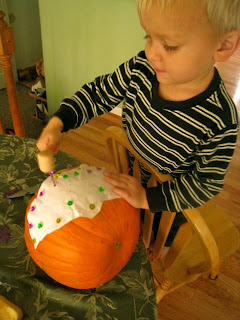 I found a great peg kit for Lil' Wingnut. I helped him clean his pumpkin and I pinned his pattern on the pumpkin for him, but he did the rest of the work. There's nothing more satisfying to a three year old boy than being able to pound pegs with a hammer. He told me so himself. 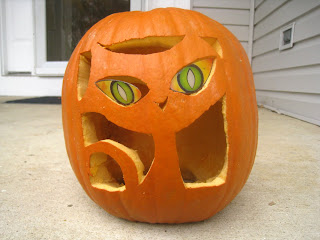 Special K did all of the work on her pumpkin on her own. I assisted with the carving, but only to help her guide her saw. 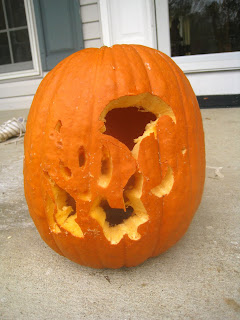 Skoshi A chose a fairly difficult pattern. Believe it or not this is an improvement over her pumpkin of last year. It's supposed to be a bat, but she still gets a little confused over what pieces should be removed and which pieces should stay intact. We'll call this our abstract pumpkin. 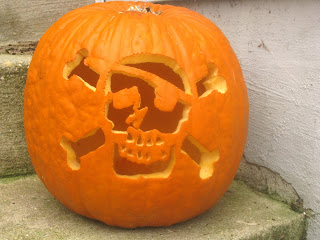 Oleander did all the work on her skull on her own, with absolutely no guidance. This is her best work to date. She did a wonderful job cleaning her carving to make sure the image was clear and sharp. 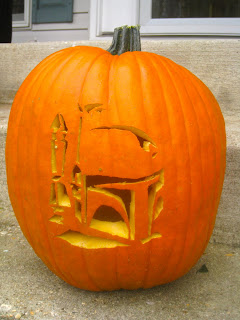 Karate Kid found a pattern online for her Boba Fett pumpkin.
Check out this beautiful, pro-life pumpkin from "A Wink and a Smile".
Email Post
Labels: fun Halloween

First of all...what happened to StatNut...is he still afraid of touching pumpkin seeds...thought he would have grown out of that years ago. Well I guess we have our Jaylee who has the same reaction to Barbies. Great job to the gang on their carvings. Angelina the Ballernia definitely wins the Picaso award for an icredibly well carved gourd whose interpretation is left up to the beholder. Lil' Wingy wins the testosterone award for his "If you can't carve it...beat it with a hammer and peg" creativity. For Kitty Kat I give her the Spooky Eyed stop looking at me award. Those creepy eyes keep following me when I scroll down the page. For Little O I give the Poison Control award for providing a percise replica of a poison symble in pumpkin form...all she needed was a little dry ice to cause smoke to come out of it. Finally to Shorty...the I can't get Star Wars out of my head award. Be careful with letting her touch the Thanksgiving turkey Mau...it may end up looking like the death star or millennium falcon or what she might do to a chocloate Santa (R2D2?). Great job gang...you all have vast supperior carving skills than your uncle (who has none).

Seahawkfan said…
I HATE carving pumpkins. does that answer your question uncle baldy? I was also still moping over the seahawks game two weeks before and I will continue moping until they decide to win again. And 'angelina the ballerina' (which is a really lame nickname) probably has way less skill at carving than you (even though you are probably horrible). anyways, i would rather decorate my room with spider webs than carve a pumpkin... which I did do and i've been crawling all around my room because I don't feel like taking them down.