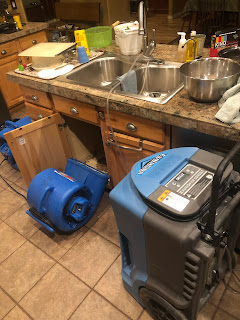 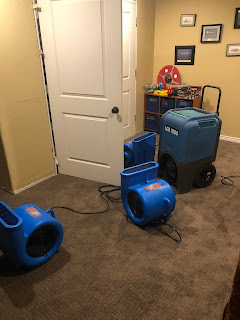 The dishwasher had been running for just a few moments before I began to hear what sounded like a faucet running under the sink.  I threw open the cupboard and sure enough water was pouring from the garbage disposal.  I switched off the dishwasher, unplugged the disposal, mopped up the water under the sink, and put a large bowl under the disposal to catch any drips.  We thought we'd just need to call in the plumber and get the disposal replaced.  Unfortunately, several hours later, Leo let us know that the carpet was wet down in the basement where he'd been playing. I looked at the ceiling and saw four spots in which the paint had bubbled out and had been dripping water.  Time to call in the disaster crew.

6 years ago we had a water leak which sprung from ice dams that had formed in our gutters and broken up the stucco allowing water to run down the interior walls of our two front rooms. It caused extensive damage that took more than a month to demo and repair.  Boy, I hope this water damage is not as extensive.

The blowers are here for at least 3 days. Then the demo will start. The insurance adjustor and disaster crew will flesh out whether the entire sink cabinet will need to be replaced. I'm hoping not. Several drywall panels will need to be replaced in the ceiling, but we are fairly certain no damage was done to the carpet. Small blessings, right?

This puts a real damper on our plans to celebrate the Solemnity of Saint Joseph today.  Plans for Italian meatballs with gravy and delicious little Frittelle di Guiseppe have been abandoned for pizza at Blaze Pizza. Sigh. Saint Joseph, pray for us!