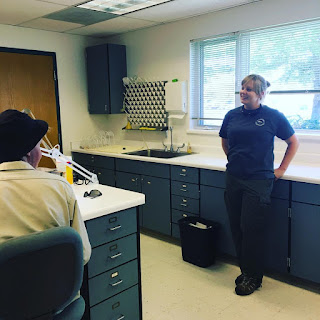 Nadja officially graduated from the University of Utah in May with a BS in Biology.  Last summer she interned with Salt Lake Mosquito Abatement, and this season she was hired as the lab supervisor.  Recently Olivia and I were given a tour of the facility, and I could see the definite pride Nadja took in the lab and the work she does there.  She showed us the mosquito colonies she has so painstakingly raised, even feeding them on her own blood.  Her bosses genuinely like her and it is evident she is a very hard worker.  She is still unsure if this is the path she will continue to take, especially since the position is seasonal and she has bills to pay, but it is a great place for her to build her resume.

Recently, we've had a several cases of Zika appear in Utah and one Zika related death.  All have been cases contracted while traveling to Zika prone areas, with the exception of one case in which a family caretaker contracted the virus from the man he was caring for.  Nonetheless, this has sent Salt Lake Mosquito Abatement into alert mode and they are diligently collecting data and searching for potential Zika carrying mosquitos.

Of course the local news agencies have been frequent visitors to the lab, doing their best to get the inside scoop.  Nadja has been featured in several stories and a photograph of her hand holding tweezers with a mosquito has been picked up and used several times by the AP.  I think it
is all so interesting and cool and we are so proud of the work Nadja has been doing.

If you are interested in reading or seeing some of the stories in which she's been photographed click on the following links: